aconite, to leopards and wolves;

Among the examples of pairings whose antipathies are not as vehement as the hatred thieves have of a certain usage of Pantagruelion.

In De Materia Medica (“The Materials of Medicine”), Dioscorides describes two different plants, the first Akoniton lycoctonum (IV.77), which was used as an anodyne (pain reliever) in eye medications, and to kill panthers, wolves, and other wild beasts. In the next chapter (IV.78), he describes “the other aconitum,” Aconitum napellus (monkshood), which also is poisonous and used to kill wolves. Aconitum napellus is so named, says Theophrastus (IX.16.4-5), because the tuberous root of the plant was thought to resemble a small turnip (napus) and “in this root resides its deadly property” (the alkaloid aconitine). He goes on to say that, depending upon how it is compounded, the effect of the poison can be immediate or fatal in several months or even a year or two—the longer the time, the more painful the death. In general, it was deadly to any four-footed animal and “kills them the same day if the root or leaf is put on the genitals” (IX.18.2). 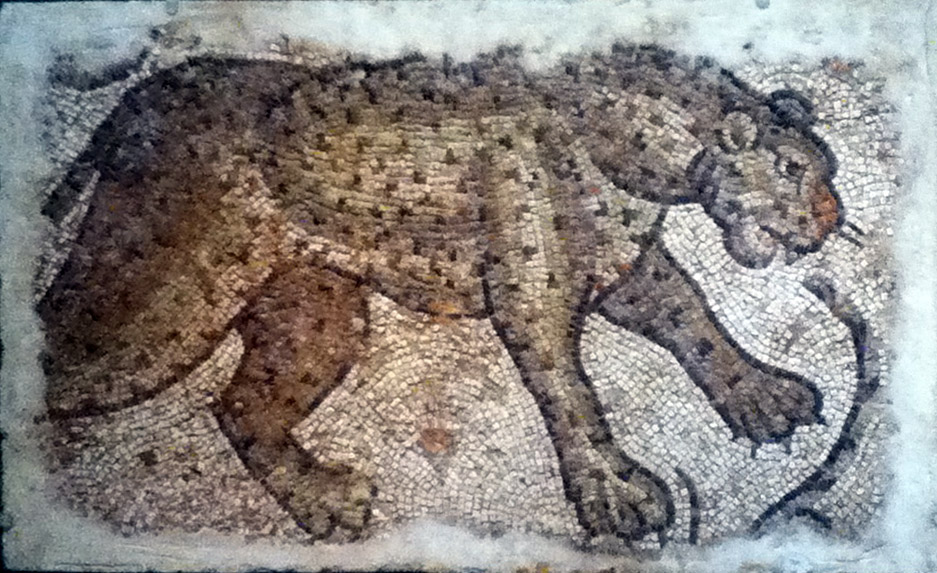 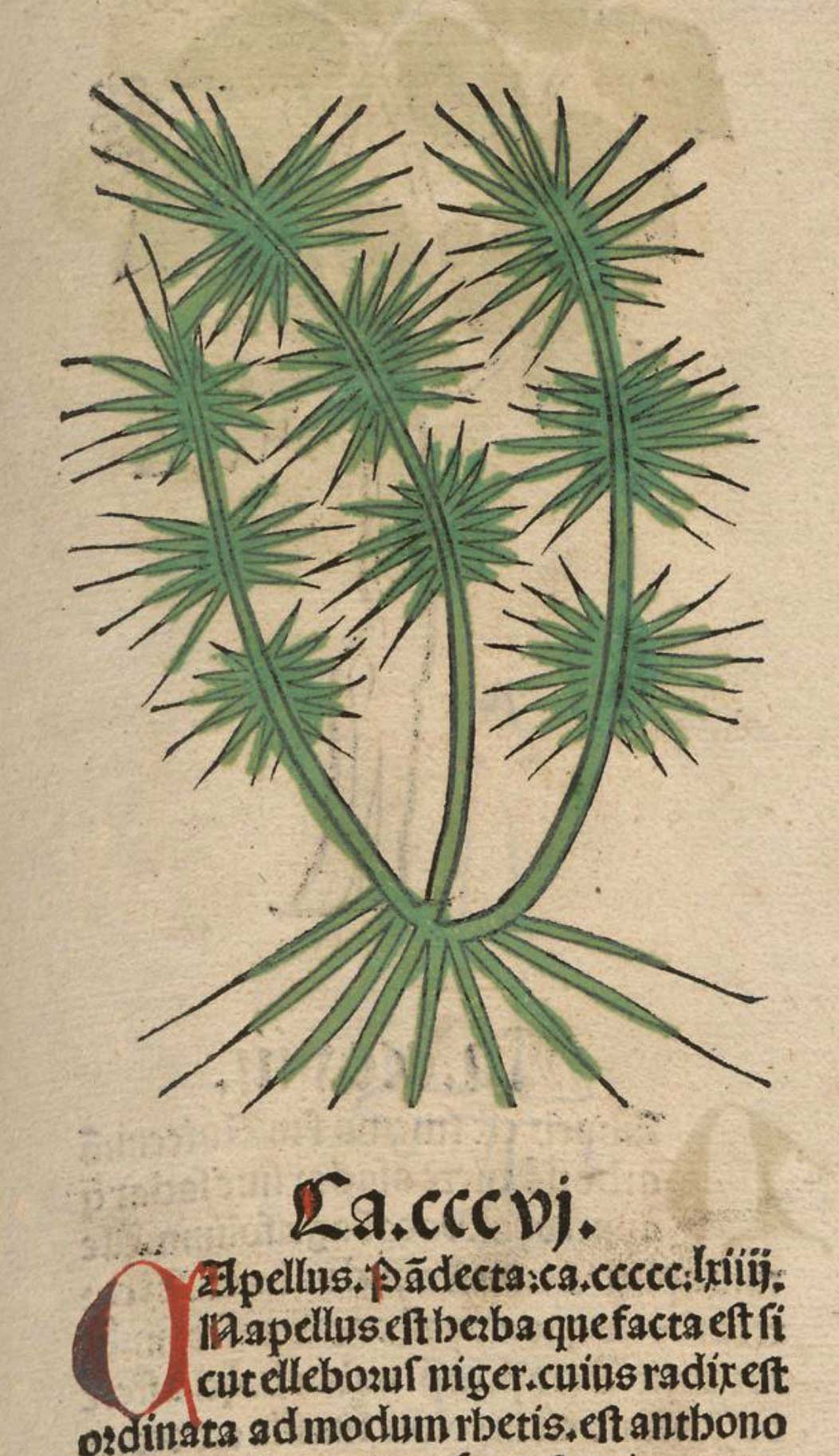 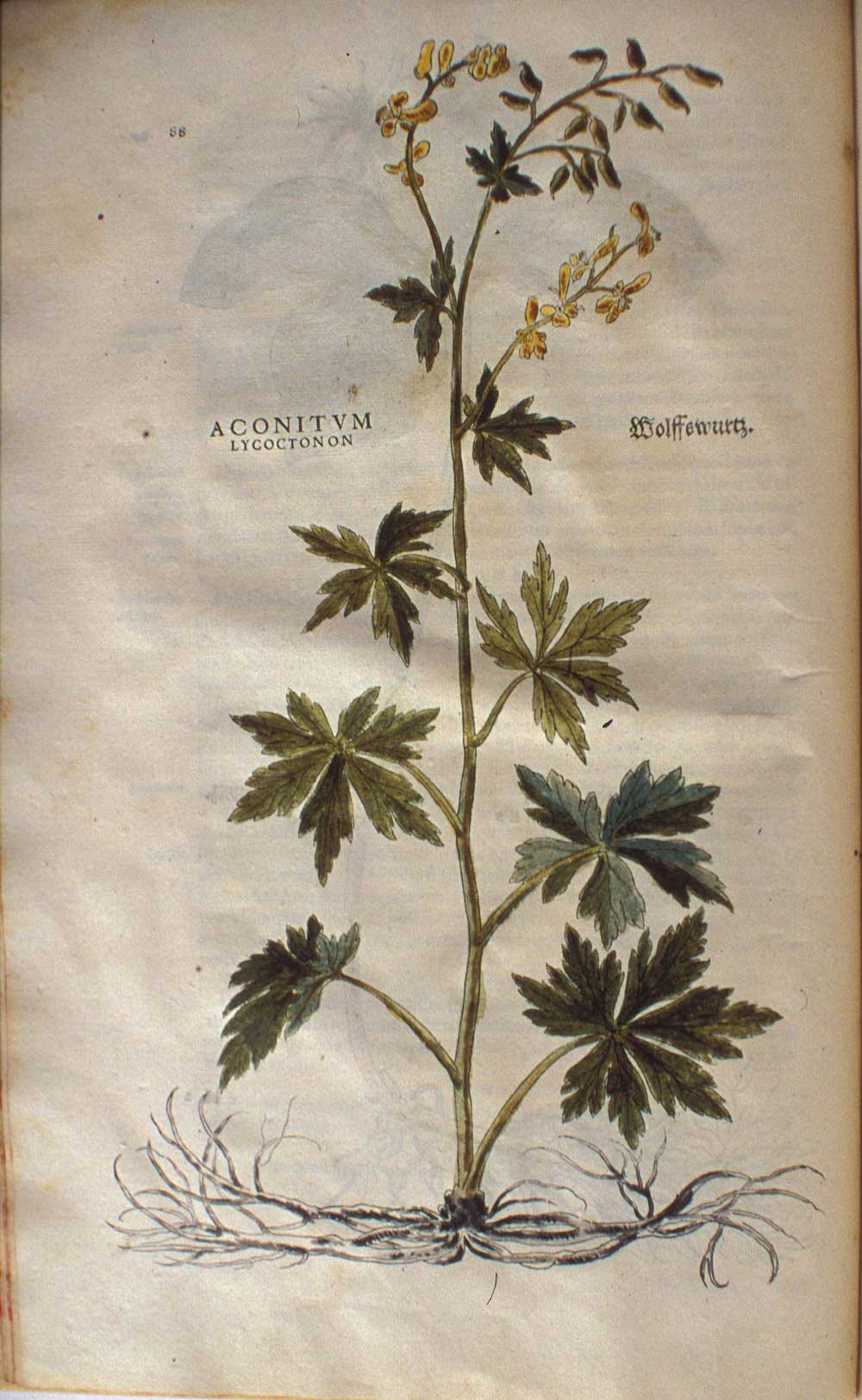 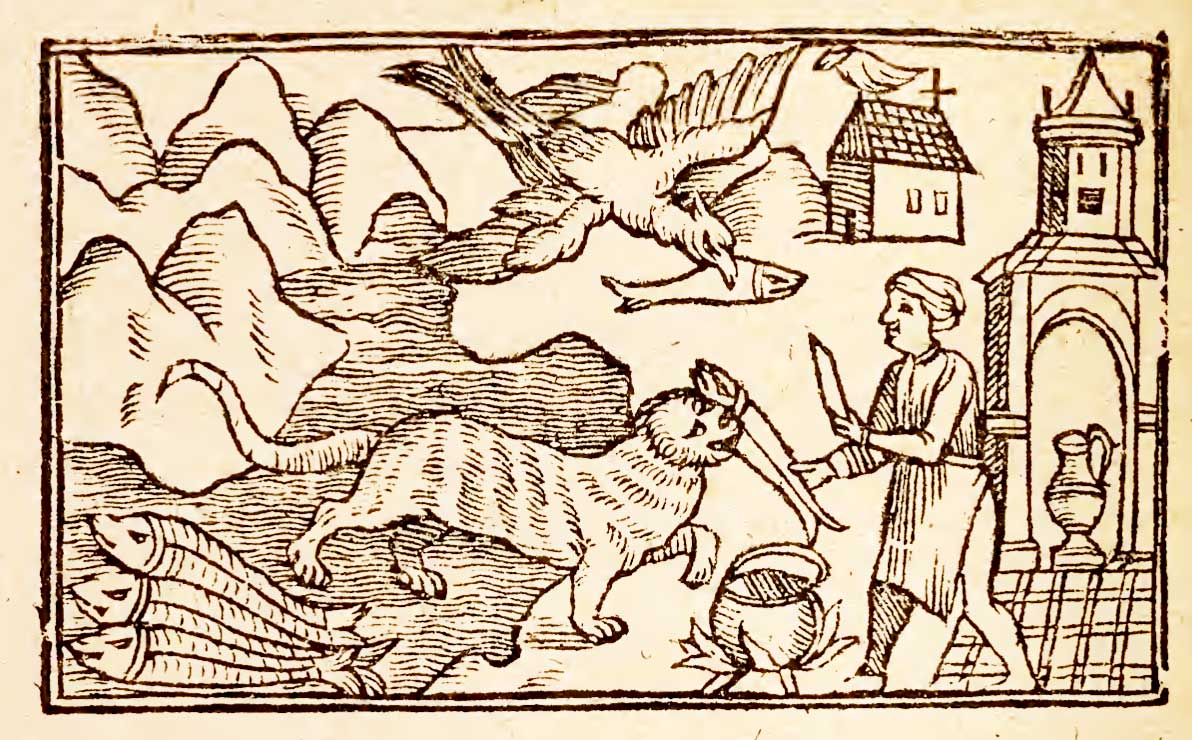 Barbarian hunters catch leopards by means of meat rubbed over with wolf’s-bane; their throats are at once attacked by violent pain (in consequence of which some people have given this poison a Greek name meaning choke-leopard), but to cure this the creature doses itself with human excrement, and in general it is so greedy for this that shepherds have a plan of hanging up some of it in a vessel too high for the leopard to be able to reach it by jumping up, and the animal keeps springing up and trying to get it till it is exhausted and finally dies, although otherwise its vitality is so persistent that it will go on fighting for a long time after its entrails have been torn out.

But who could revere enough the diligent research of the ancients? It is established that of all poisons the quickest to act is aconite, and that death occurs on the same day if the genitals of a female creature are but touched by it. This was the poison that Marcus Caelius accused Calpurnius Bestia of using to kill his wives in their sleep. Hence the damning peroration of the prosecutor’s speech accusing the defendant’s finger. Fable has it that aconite sprang out of the foam of the dog Cerberus when Hercules dragged him from the underworld, and that this is why it grows around Heraclea in Pontus, where is pointed out the entrance to the underworld used by Hercules. Yet even aconite the ancients have turned to the benefit of human health, by finding out by experience that administered in warm wine it neutralizes the stings of scorpions. It is its nature to kill a human being unless in that being it finds something else to destroy. Against this alone it struggles, †regarding it as more pressing than the find.† [This is the only fight, when the aconite discovers a poison in the viscera.] What a marvel! Although by themselves both are deadly, yet the two poisons in a human being perish together so that the human survives. Moreover even remedies used by wild beasts have been handed down by the ancients, who have shown how venomous creatures also by themselves obtain healing. Scorpions, touched by aconite, become numbed, and are pale and stupefied, acknowledging their defeat. They find a help in white hellebore, its touch dispelling the torpor; the aconite yields to two evil foes, one peculiar to itself and one common to all creatures. If anyone believes that these discoveries could, by any chance, have been made by a man, he shows himself ungrateful for the gods’ gifts. They touch flesh with aconite, and kill panthers by a mere taste of it, otherwise panthers would overrun the regions where they are found. For this reason some have called aconite pardalianches, that is panther-strangler. But it has been proved that panthers are at once saved from this death by tasting human excrement; surely nobody doubts that this remedy has been found by Chance, and that on every occasion it is even today a new find, since wild animals have neither reason nor experience for results to be passed from one to another. This Chance therefore, this is that great deity who has made most of the discoveries that enrich our life, this is the name of him by whom is meant she who is at once the Mother and the Mistress of all creation. Either guess is equally likely, whether we judge that wild animals make these discoveries every day or that they possess a never-failing instinct. Again it is shameful that all animals except man know what is health-giving for themselves. Our ancestors however advertised the view that aconite is also a very health-giving ingredient of preparations for the eyes, openly declaring their belief that no evil at all is without some admixture of good. It will therefore be right for me, who have described no poisons, to point out the nature of aconite, if only for the purpose of detecting it. It has leaves like those of cyclamen or of cucumber, not more than four, rising from the root and slightly hairy, and a root of moderate size, like a crayfish (cammarus), whence some have called it cammaron, and others thelyphonon, for the reason I have given already. The end of the root curves up a little like a scorpion’s tail, whence some have called it also scorpion. There have been some who would prefer to call it myoctonos, [I.e. “mouse-killer”] since at a distance, even a long distance, its smell kills rats and mice. The plant grows on bare crags which are called aconae, and for that reason some have given it the name of aconite, there being nothing near, not even dust, to give it nourishment. This then is the reason for its name given by some; others have thought it was so named because it had the same power to cause rapid death as whetstones had to give an edge to an iron blade; no sooner was the stone applied than its rapid action was noticeable. [It is interesting to compare Pliny’s account of aconite with Dioscorides IV 76 (Wellmann). In the latter is given the effect of aconite on scorpions with its antidote in the touch of white hellebore. The preceding sentence is: ῥίζα ὁμοία σκορπίου οὐρᾷ, στίλβουσα ἀλαβαστροειδῶς. For this last Pliny has only: cauda radicis incurvatur paulum scorpionum modo. The phrase cauda radicis is peculiar, and suggests that Pliny had a Greek text before him in which ῥίζα and οὐρὰ (or some case of it) were side by side. There is nothing in Dioscorides corresponding to arida, which appears to have arisen from its partial likeness to cauda.]

Wolf’s-bane to Panthers and Wolves

A panther or leopard. (Now only an archaic or poetic name.)

1382 John Wyclif Bible Jeremiah v. 6 A parde wakynge on the citees of hem.

1600 William Shakespeare As You Like It ii. vii. 150 Then, a Soldier, Full of strange oaths, and bearded like the Pard.

1820 John Keats Ode Nightingale iv, I will fly to thee, Not charioted by Bacchus and his pards.

1578 Henry Lyte, translator Dodoens’ Niewe herball or historie of plantes 426 Aconit is of two sortes… the one is named Aconit that baneth, or killeth Panthers. The other… Aconit that killeth Woolfs.

1601 Philemon Holland, translator Pliny’s History of the world, commonly called the Natural historie II. 271 (1634) It groweth naturally vpon bare and naked rocks, which the Greeks cal Aconas: which is the reason (as some haue said) why it was named Aconitum.

An extract or preparation of this plant, used as a poison and in pharmacy. Poetic: Deadly poison.

1606 Thomas Dekker Newes from hell; brought by the diuells carrier (1842) 87 note, Ingenious, fluent, facetious T. Nash, from whose abundant pen hony flow’d to thy friends, and mortall aconite to thy enemies.