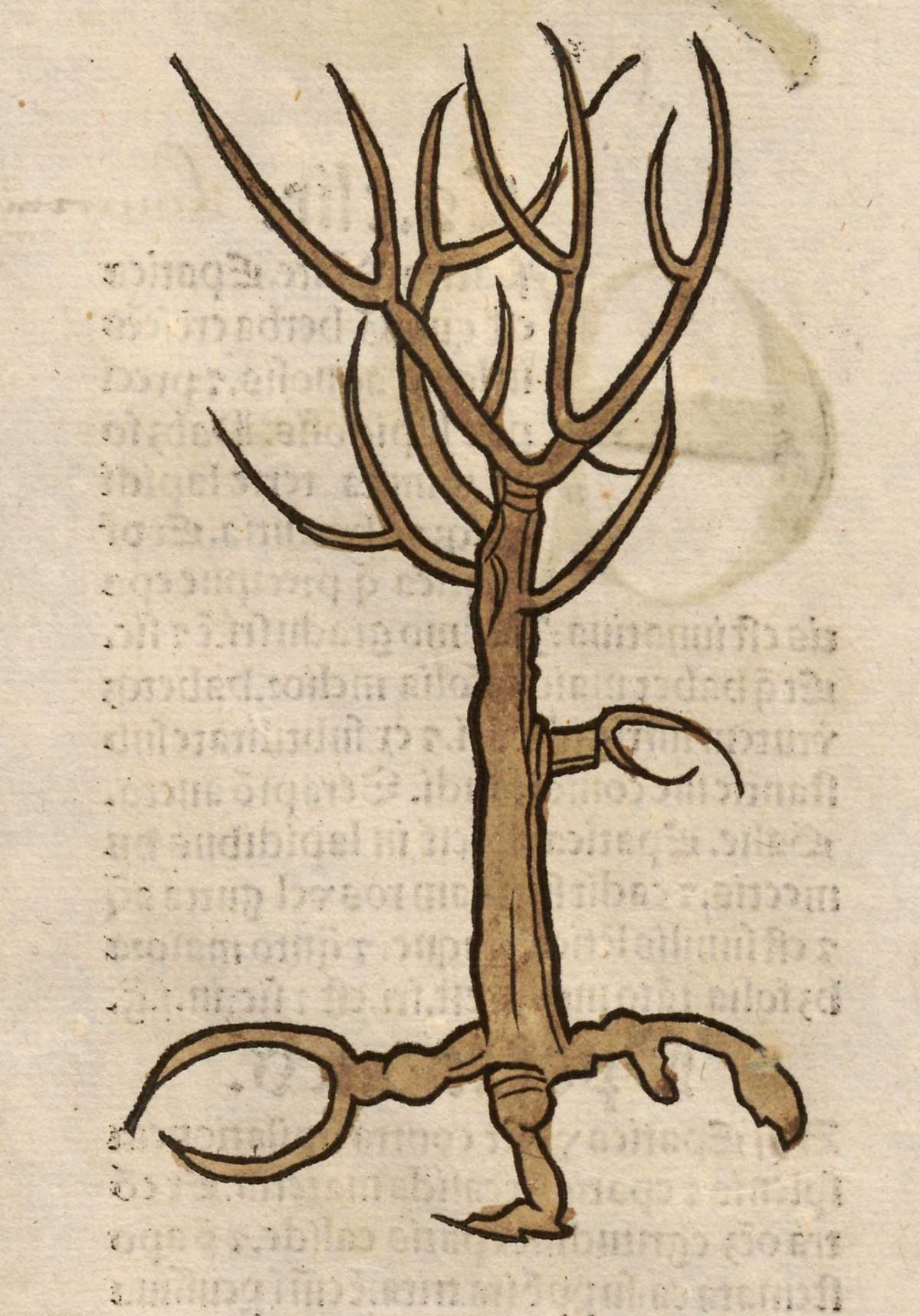 trees have their allotted climes. India alone bears black ebony; to the Sabaeans alone belongs the frankincense bough. Why should I tell you of the balsams that drip from the fragrant wood, or of the pods of the ever blooming acanthus? Why tell of the Ethiopian groves, all white with downy wool [molli lana, i.e. cotton], or how the Seres comb from leaves their fine fleeces [In Virgil’s time the Romans, knowing nothing of the silkworm, supposed that the silk they imported from the East grew on the leaves of trees] ?

Ezekiel 27 King James Version (KJV)
27 The word of the Lord came again unto me, saying,
2 Now, thou son of man, take up a lamentation for Tyrus;
3 And say unto Tyrus, O thou that art situate at the entry of the sea, which art a merchant of the people for many isles, Thus saith the Lord God; O Tyrus, thou hast said, I am of perfect beauty.
4 Thy borders are in the midst of the seas, thy builders have perfected thy beauty.
5 They have made all thy ship boards of fir trees of Senir: they have taken cedars from Lebanon to make masts for thee.
6 Of the oaks of Bashan have they made thine oars; the company of the Ashurites have made thy benches of ivory, brought out of the isles of Chittim.
7 Fine linen with broidered work from Egypt was that which thou spreadest forth to be thy sail; blue and purple from the isles of Elishah was that which covered thee.
8 The inhabitants of Zidon and Arvad were thy mariners: thy wise men, O Tyrus, that were in thee, were thy pilots.
9 The ancients of Gebal and the wise men thereof were in thee thy calkers: all the ships of the sea with their mariners were in thee to occupy thy merchandise.
10 They of Persia and of Lud and of Phut were in thine army, thy men of war: they hanged the shield and helmet in thee; they set forth thy comeliness.
11 The men of Arvad with thine army were upon thy walls round about, and the Gammadims were in thy towers: they hanged their shields upon thy walls round about; they have made thy beauty perfect.
12 Tarshish was thy merchant by reason of the multitude of all kind of riches; with silver, iron, tin, and lead, they traded in thy fairs.
13 Javan, Tubal, and Meshech, they were thy merchants: they traded the persons of men and vessels of brass in thy market.
14 They of the house of Togarmah traded in thy fairs with horses and horsemen and mules.
15 The men of Dedan were thy merchants; many isles were the merchandise of thine hand: they brought thee for a present horns of ivory and ebony.
16 Syria was thy merchant by reason of the multitude of the wares of thy making: they occupied in thy fairs with emeralds, purple, and broidered work, and fine linen, and coral, and agate.
17 Judah, and the land of Israel, they were thy merchants: they traded in thy market wheat of Minnith, and Pannag, and honey, and oil, and balm.
18 Damascus was thy merchant in the multitude of the wares of thy making, for the multitude of all riches; in the wine of Helbon, and white wool.
19 Dan also and Javan going to and fro occupied in thy fairs: bright iron, cassia, and calamus, were in thy market.
20 Dedan was thy merchant in precious clothes for chariots.
21 Arabia, and all the princes of Kedar, they occupied with thee in lambs, and rams, and goats: in these were they thy merchants.
22 The merchants of Sheba and Raamah, they were thy merchants: they occupied in thy fairs with chief of all spices, and with all precious stones, and gold.
23 Haran, and Canneh, and Eden, the merchants of Sheba, Asshur, and Chilmad, were thy merchants.
24 These were thy merchants in all sorts of things, in blue clothes, and broidered work, and in chests of rich apparel, bound with cords, and made of cedar, among thy merchandise.
25 The ships of Tarshish did sing of thee in thy market: and thou wast replenished, and made very glorious in the midst of the seas.
26 Thy rowers have brought thee into great waters: the east wind hath broken thee in the midst of the seas.
27 Thy riches, and thy fairs, thy merchandise, thy mariners, and thy pilots, thy calkers, and the occupiers of thy merchandise, and all thy men of war, that are in thee, and in all thy company which is in the midst of thee, shall fall into the midst of the seas in the day of thy ruin.
28 The suburbs shall shake at the sound of the cry of thy pilots.
29 And all that handle the oar, the mariners, and all the pilots of the sea, shall come down from their ships, they shall stand upon the land;
30 And shall cause their voice to be heard against thee, and shall cry bitterly, and shall cast up dust upon their heads, they shall wallow themselves in the ashes:
31 And they shall make themselves utterly bald for thee, and gird them with sackcloth, and they shall weep for thee with bitterness of heart and bitter wailing.
32 And in their wailing they shall take up a lamentation for thee, and lament over thee, saying, What city is like Tyrus, like the destroyed in the midst of the sea?
33 When thy wares went forth out of the seas, thou filledst many people; thou didst enrich the kings of the earth with the multitude of thy riches and of thy merchandise.
34 In the time when thou shalt be broken by the seas in the depths of the waters thy merchandise and all thy company in the midst of thee shall fall.
35 All the inhabitants of the isles shall be astonished at thee, and their kings shall be sore afraid, they shall be troubled in their countenance.
36 The merchants among the people shall hiss at thee; thou shalt be a terror, and never shalt be any more.

We have already described the wool-bearing trees of the Chinese in making mention of that race, and we have spoken of the large size of the trees in India. One of those peculiar to India, the ebony, is spoken of in glowing terms by Virgil, [Georgics II. 116 f.] who states that it does not grow in any other country. Herodotus, [Herodotus says 200 logs, III. 97. The term ‘ebony’ was and still is applied to many different hard woods imported into European countries] however, prefers it to be ascribed to Ethiopia, stating that the Ethiopians used to pay as tribute to the Kings of Persia every three years a hundred logs of ebony, together with gold and ivory. Nor also should we omit the fact, since that author indicates it, that the Ethiopians used to pay twenty large elephant tusks on the same account. So high was the esteem in which ivory was held in the 310th year [446 BC; but Thurii, where Herodotus settled to escape from political disorders at Halicarnassus, his native city, was not colonized by Greek settlers till 443 b.c. Hdt. III. 115] of our city, the date at which that author composed his history at Thurii in Italy; which makes all the more surprising the statement which we accept on his authority, that nobody of Asia or Greece had hitherto been seen who had ever seen the river Po. The exploration of the geography of Ethiopia, which as we have said had lately been reported to the Emperor Nero, showed that over a space of 1,996 miles from Syene on the frontier of the empire to Meroe trees are rare, and there are none except of the palm species. That is possibly the reason why ebony was the third most important item in the tribute paid.
IX. Ebony was exhibited at Rome by Pompey the Great on the occasion of his triumph over Mithridates. According to Fabius ebony does not give out a flame, yet burns with an agreeable scent. It is of two kinds: the better one, which grows as a tree, is rare—it is of a smooth substance and free from knots, and of a shiny black colour that is pleasing to the eye even in the natural state without the aid of art; whereas the other grows as a shrub like the cytisus, and is spread over the whole of India.

A hard black wood, obtained from various species of the N.O. Ebenaceæ, especially that mentioned under ebon, and Diospyros Melanoxylon, a native of Coromandel.

1382 John Wyclif Bible Ezekiel xxvii. 15 Teeth of… hebenyf [Vulg. dentes hebeniros], that is a tree that after that it is kit waxith hard as a stoon.