as did Artemisia the ashes of Mausolus her husband, 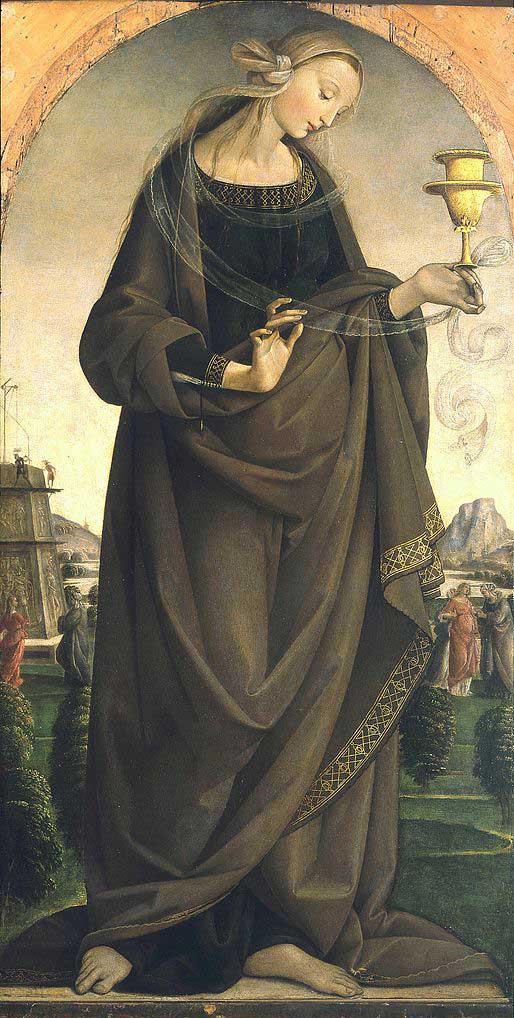 Colossal statue of a man, traditionnally identified with Maussollos, king of Caria, ca. 350 BC, from the north side of the Mausoleum, Mausoleum at Halicarnassus, British Museum

The story of Artemisia

Book 10, Chapter 18.  Artemisia is said to have loved her husband with a love surpassing all the tales of passion and beyond one’s conception of human affection. Now Mausolus, as Marcus Tullius tells us [Tusc. Disp. iii. 75], was king of the land of Caria; according to some Greek historians he was governor of a province, the official whom the Greeks term a satrap. When this Mausolus had met his end amid the lamentations and in the arms of his wife [in 353 BC], and had been buried with a magnificent funeral, Artemisia, inflamed with grief and with longing for her spouse, mingled his bones and ashes with spices, ground them into the form of a powder, put them in water, and drank them; and she is said to have given many other proofs of the violence of her passion. For perpetuating the memory of her husband, she also erected, with great expenditure of labour, that highly celebrated tomb1, among the seven wonders of the world.2

1. The famous Mausoleum at Halicarnassus, adorned by Scopas, Bryaxis, Timotheus and Leochares with sculptures, the remains of which are now in the British Museum. It was a square building, 140 feet high, surrounded by Ionic columns. It stood upon a lofty base and was surmounted by a pyramid of steps ending in a platform, on which was a fourhorse chariot. The term mausoleum was applied by the Romans to large and magnificent tombs such as the mausoleum of Augustus and that of Hadrian.

2. The other six “wonders” were: The walls and hanging gardens of Babylon; the temple of Diana at Ephesus; the statue of Olympian Zeus by Phidias; the Pyramids; and the Pharos, or lighthouse, at Alexandria.

Artemisia, widow of Mausolus, King of Caria, drank his ashes in water; and the tomb she built for him — the Mausoleum — was one of the seven wonders of the world!

The magnificent tomb of Mausolus, King of Caria, erected in the middle of the 4th century b.c. at Halicarnassus by his queen Artemisia, and accounted one of the seven wonders of the world.

1546 Thomas Langley, translator An abridgement of the notable woorke of Polidore Vergil… iii. vii. 71 b, Mausoleum that was the Tombe of Mausolus kynge of Caria.

A genus of plants (N.O. Compositæ), distinguished by a peculiarly bitter or aromatic taste, including the Common Wormwood, Mugwort, and Southernwood.

Artemisia I of Caria

Artemisia I of Caria (fl. 480 BC) was a Greek queen of the ancient Greek city-state of Halicarnassus and of the nearby islands of Kos, Nisyros and Kalymnos, within the Achaemenid satrapy of Caria, in about 480 BC. She fought as an ally of Xerxes I, King of Persia against the independent Greek city states during the second Persian invasion of Greece.[3] She personally commanded her contribution of five ships at the naval battle of Artemisium and in the naval Battle of Salamis in 480 BC. She is mostly known through the writings of Herodotus, himself a native of Halicarnassus, who praises her courage and the respect in which Xerxes held her.

Another Artemisia also is well-known, Artemisia II of Caria, satrap of Caria and builder of the Mausoleum at Halicarnassus in the 4th century BC.

Artemisia II of Caria (Greek: Ἀρτεμισία; died 350 BC) was a naval strategist, commander and the sister (and later spouse) and the successor of Mausolus, ruler of Caria. Mausolus was a satrap of the Achaemenid Empire, yet enjoyed the status of king or dynast of the Hecatomnid dynasty. After the death of her brother/husband, Artemisia reigned for two years, from 353 to 351 BCE. Her ascension to the throne prompted a revolt in some of the island and coastal cities under her command due to their objection to a female ruler. Her administration was conducted on the same principles as that of her husband; in particular, she supported the oligarchical party on the island of Rhodes.

Because of Artemisia’s grief for her brother-husband, and the extravagant and bizarre forms it took, she became to later ages “a lasting example of chaste widowhood and of the purest and rarest kind of love”, in the words of Giovanni Boccaccio. In art, she was usually shown in the process of consuming his ashes, mixed in a drink.