measure all the Zodiac, 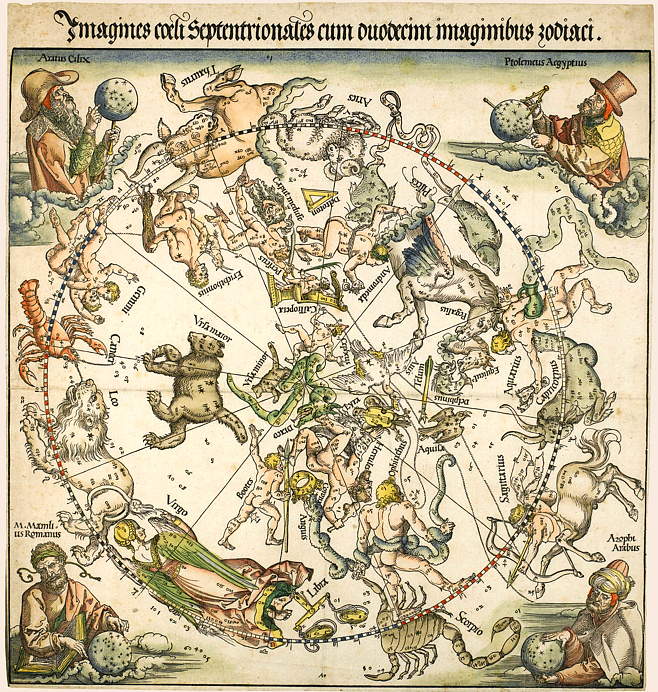 A belt of the celestial sphere extending about 8 or 9 degrees on each side of the ecliptic, within which the apparent motions of the sun, moon, and principal planets take place; it is divided into twelve equal parts called signs.

C. 1391 Geoffrey Chaucer A treatise on the astrolabe Prol. 3 To knowe in owre orizonte with wych degree of the zodiac that the Mone arisith in any latitude.

1426 John Lydgate, translator De Guileville’s Pilgrimage of the life of man 17200 She held also a gret ballaunce, Only off purpos (yiff she konne,) To peyse the sodyak and the sonne.

1549 Complaynt of Scotlande vi. 50 Ane vthir grit circle in the spere, callit the zodiac, the quhilk deuidis the circle equinoctial in tua partis.

1588 William Shakespeare Titus Andronicus ii. i. 7 When the golden Sunne… Gallops the Zodiacke in his glistering Coach.

1611 John Donne Poems, Anatomy of the World 263 They have impal’d within a Zodiake The free-borne Sun, and keepe twelve Signes awake To watch his step.

Signs of the zodiac: the twelve equal parts into which the zodiac is divided, and through one of which the sun passes in each month; they are named after the twelve constellations with which at a former epoch they severally coincided approximately.

1390 John Gower Confessio amantis III. 117 Hou that the Signes sitte arowe, Ech after other be degre In substance and in proprete The zodiaque comprehendeth Withinne his cercle, as it appendeth.

C. 1532 Giles Du Wes An introductorie for to lerne to rede, to pronounce and to speke French trewly 1054 The xii signes of the Zodiacque.

1585 Fetherstone tr. Calvin on Acts xxviii. 11 The signe in the Zodiacke called Gemini.

1715 translation Gregory’s Astronomy I. 203 The images of the Stars have removed from the Signs of the Zodiac, to which they originally gave names.