Among people who finished their life high and short after a certain application of Pantagruelion. 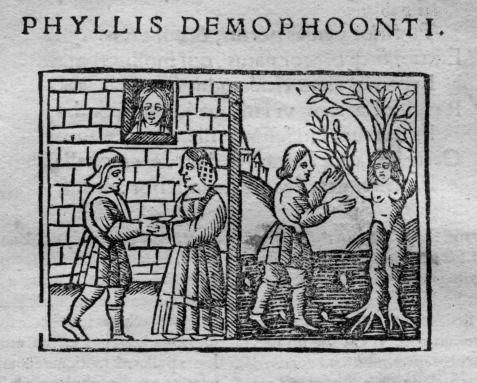 Begin first, Mopsus, if you have any love songs for Phyllis, or aught in praise of Alcon, or any gibes at Codrus. Begin. Tityrus will tend the grazing kids.

2.105. Ah me! if you ask who I, Phyllis, am, and whence—I am she, Demophoon, who, when you had been driven far in wanderings on the sea, threw open to you the havens of Thrace and welcomed you as guest, you, whose estate my own raised up, to whom in your need I in my plenty gave many gifts, and would have given many still; I am she who rendered to you the broad, broad realms of Lycurgus, scarce meet to be ruled in a woman’s name, where stretches icy Rhodope to Haemus with its shades, and sacred Hebrus drives his headlong waters forth—to you, on whom mid omens all sinister my maiden innocence was first bestowed, and whose guileful hand ungirdled my chaste zone! Tisiphone was minister at that bridal, with shrieks, and the bird that shuns the light chanted her mournful note; Allecto was there, with little serpents coiled about her neck, and the lights that waved were torches of the tomb!…

There is a bay, whose bow-like lines are gently curved to sickle shape; its outmost horns rise rigid and in rock-bound mass. To throw myself hence into the waves beneath has been my mind; and, since you [Demophoon] still pursue your faithless course, so shall it be. Let the waves bear me away, and cast me up on your shores, and let me meet your eyes untombed! Though in hardness you be more than steel, than adamant, than your very self, you shall say: “Not so, Phyllis, should I have been followed by thee! “Oft do I long for poison; oft with the sword would I gladly pierce my heart and pour forth my blood in death. My neck, too, because once offered to the embrace of your false arms, I could gladly ensnare in the noose.…”

Demophon with a few ships put in to the land of the Thracian Bisaltians,2 and there Phyllis, the king’s daughter, falling in love with him, was given him in marriage by her father with the kingdom for her dower. But he wished to depart to his own country, and after many entreaties and swearing to return, he did depart. And Phyllis accompanied him as far as what are called the Nine Roads, and she gave him a casket, telling him that it contained a sacrament of Mother Rhea, and that he was not to open it until he should have abandoned all hope of returning to her. And Demophon went to Cyprus and dwelt there. And when the appointed time was past, Phyllis called down curses on Demophon and killed herself; and Demophon opened the casket, and, being struck with fear, he mounted his horse and galloping wildly met his end; for, the horse stumbling, he was thrown and fell on his sword. But his people settled in Cyprus.

Note 2 Demophon and his brother Acamas, the sons of Theseus, had gone to Troy to rescue their grandmother Aethra from captivity. See above, Epitome, v. 22. The following story of the loves and sad fate of Demophon and Phyllis is told in almost the same words by Tzetzes, Schol. on Lycophron, 495, except that for the name of Demophon he substitutes the name of his brother Acamas. Lucian also couples the names of Acamas and Phyllis (De saltatione, 40). A pretty story is told of the sad lovers by Servius. He says that Phyllis, despairing of the return of Demophon, hanged herself and was turned into a leafless almond tree; but that when Demophon came and embraced the trunk of the tree, it responded to his endearments by bursting into leaf; hence leaves, which had been called petala before, were ever after called phylla in Greek. See Servius, on Virgil, Ecl. v. 10. Compare Scriptores rerum mythicarum Latini, ed. G. H. Bode, vol. i. pp. 51 and 146 sq. (First Vatican Mythographer, 159; Second Vatican Mythographer, 214). The story is told in a less romantic form by Hyginus (Fab. 59, compare 243). He says that when Phyllis died for love, trees grew on her grave and mourned her death at the season when their leaves withered and fell.

The Bibliotheca (Ancient Greek: Βιβλιοθήκη Bibliothēkē, “Library”), also known as the Bibliotheca of Pseudo-Apollodorus, is a compendium of Greek myths and heroic legends, arranged in three books, generally dated to the first or second century AD.

The author was traditionally thought to be Apollodorus of Athens, but that attribution is now regarded as false, and so “Pseudo-” was added to Apollodorus.

The Bibliotheca has been called “the most valuable mythographical work that has come down from ancient times”.

The first mention of the work is by Photius in the 9th century. It was almost lost in the 13th century, surviving in one now-incomplete manuscript,[8] which was copied for Cardinal Bessarion in the 15th century; the other surviving manuscripts derive from Bessarion’s copy.

The first printed edition of the Bibliotheca was published in Rome in 1555, edited by Benedetto Egio (Benedictus Aegius) of Spoleto, who divided the text in three books

10] Phyllis, Phyllis Sithonian daughter The Queen of Thrace. This Demophoont, the son of Theseus, king of the Athenians, as he returned from the Trojan battle was over, he loved, and, in his marriage should be in, and desired. he said, in to order what belongs to him and in this way to his wedding in front of him coming back. So when I set out late, and she will love, caused shock and pain that had been rejected because he believed his life by hanging and turns almond tree without leaves. then returned and DEMOPHOÖN, investigate the facts, her embraces, is the trunk, should be aware of the coming of the bridegroom, who is, as it were, the leaves come forth, from whence also we φύλλα have been uttered by Phyllis left, which was previously an πέταλα that were said. So in book metamorphoses books.

A native or inhabitant of Thrace, in antiquity a region to the N.E. of Macedonia, and now comprising European Turkey, southern Bulgaria, and the region of Thrace in N.E. Greece.

Of or pertaining to Thrace.

1588 Shakespeare Titus Andronicus. i. i. 138 The selfe same Gods that arm’d the Queene of Troy With opportunitie of sharpe reuenge Vpon the Thracian Tyrant in his Tent.

1667 Milton Paradise Lost vii. 34 The Race Of that wilde Rout that tore the Thracian Bard In Rhodope.

1697 Dryden Æneis vi. 877 The Thracian bard.. There stands conspicuous in his flowing vest.

Phyllis (Greek: Φυλλίς) is a character in Greek mythology, daughter of a Thracian king (according to some, of Sithon;[1][2] most other accounts do not give her father’s name at all, but one informs that he was named either Philander, Ciasus, or Thelus[3]). She married Demophon, King of Athens and son of Theseus, while he stopped in Thrace on his journey home from the Trojan War.[4]
Demophon, duty bound to Greece, returns home to help his father, leaving Phyllis behind. She sends him away with a coffin with the sacrament of Rhea, asking him to open it only when he has given up hope of returning to her. From here, the story diverges. In one version, Phyllis realizes that he will not return and commits suicide by hanging herself from a tree. Where she is buried, an almond tree grows, which blossoms when Demophon returns to her.[1] In a second version of the story, Demophon opens the caskets and, horrified by what he saw in there, rides off like wild, but his horse stumbles and he accidentally falls on his own sword.[5]
There is also some confusion regarding which nut tree she became, as hazelnuts were long called nux Phyllidos, and are still sometimes called “filberts” today.[6] In English, this version goes back at least to Gower, who writes in Confessio Amantis (ca. 1390):
That Phyllis in the same throwe
Was schape into a notetre,
That alle men it mihte se,
And after Phyllis philliberd
This tre was cleped in the yerd,
And yit for Demephon to schame
Into this dai it berth the name.
— Book 4, Lines 866–72
This story most notably appears in the second poem of Ovid’s Heroides,[7] a book of epistolary poems from mythological women to their respective men, and it also appears in the Aitia of Callimachus.
1 Servius on Virgil’s Eclogue 5. 10
2 Ovid in Remedia Amoris, 605 addresses her by the patronymic Sithonis – if indeed it is a patronymic and not an indication of her belonging to the tribe Sithones
3 Scholia on Aeschines, On the False Embassy, 31
4 Pseudo-Apollodorus, Bibliotheca Epitome of Book 4, 6. 16
5 Pseudo-Apollodorus, Bibliotheca, Epitome of Book 4, 6. 17
6 Friedlander, Barbara (1976). The Vegetable, Fruit & Nut Book: secrets of the seed. Grosset & Dunlap. p. 159.
7 Ovid, Heroides 2.59–60.