daphne, which is laurel, from Daphne; 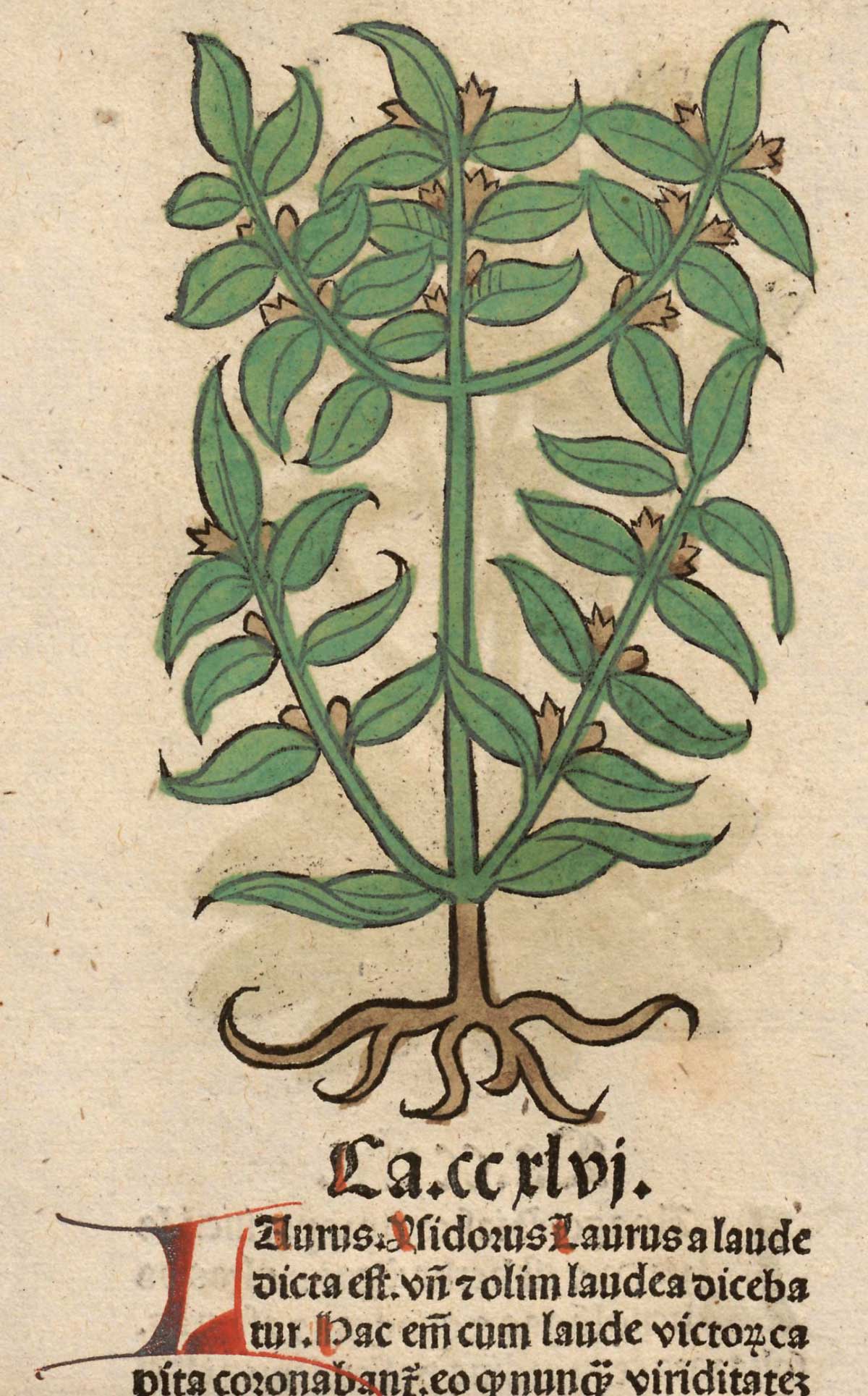 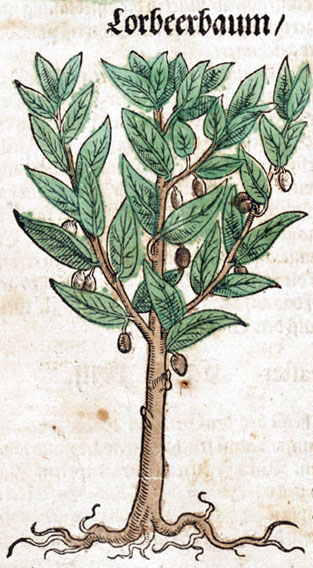 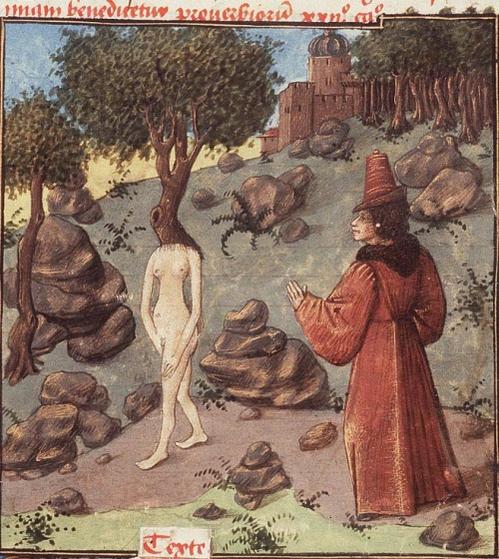 Now the first love of Phoebus was Daphne, daughter of Peneus, the river-god. It was no blind chance that gave this love, but the malicious wrath of Cupid. Delian Apollo, while still exulting over his conquest of the serpent, had seen him bending his bow with tight-drawn string, and had said: “What hast thou to do with the arms of men, thou wanton boy? That weapon befits my shoulders; for I have strength to give unerring wounds to the wild beasts, my foes, and have but now laid low the Python swollen with countless darts, covering whole acres with plague-engendering form. Do thou be content with thy torch to light the hidden fires of love, and lay not claim to my honours.” And to him Venus’ son replied: “Thy dart may pierce all things else, Apollo, but mine shall pierce thee; and by as much as all living things are less than deity, by so much less is thy glory than mine.” So saying he shook his wings and, dashing upward through the air, quickly alighted on the shady peak of Parnasus. There he took from his quiver two darts of opposite effect: one puts to flight, the other kindles the flame of love. The one which kindles love is of gold and has a sharp, gleaming point; the other is blunt and tipped with lead. This last the god fixed in the heart of Peneus’ daughter, but with the other he smote Apollo, piercing even unto the bones and marrow. Straightway he burned with love; but she fled the very name of love, rejoicing in the deep fastnesses of the woods, and in the spoils of beasts which she had snared, vying with the virgin Phoebe. A single fillet bound her locks all unarranged. Many sought her; but she, averse to all suitors, impatient of control and without thought for man, roamed the pathless woods, nor cared at all that Hymen, love, or wedlock might be. Often her father said: “Daughter, you owe me a son-in-law”; and often: “Daughter, you owe me grandsons.” But she, hating the wedding torch as if it were a thing of evil, would blush rosy red over her fair face, and, clinging around her father’s neck with coaxing arms, would say: “O father, dearest, grant me to enjoy perpetual virginity. Her father has already granted this to Diana.” He, indeed, yielded to her request. But that beauty of thine, Daphne, forbade the fulfilment of thy desire, and thy form fitted not with thy prayer. Phoebus loves Daphne at sight, and longs to wed her; and what he longs for, that he hopes; and his own gifts of prophecy deceive him. And as the stubble of the harvested grain is kindled, as hedges burn with the torches which some traveller has chanced to put too near, or has gone off and left at break of day, so was the god consumed with flames, so did he burn in all his heart, and feed his fruitless love on hope. He looks at her hair hanging down her neck in disarray, and says: “What if it were arrayed?” He gazes at her eyes gleaming like stars, he gazes upon her lips, which but to gaze on does not satisfy. He marvels at her fingers, hands, and wrists, and her arms, bare to the shoulder; and what is hid he deems still lovelier. But she flees him swifter than the fleeting breeze, nor does she stop when he calls after her: “O nymph, O Peneus’ daughter, stay! I who pursue thee am no enemy. Oh stay! So does the lamb flee from the wolf; the deer from the lion; so do doves on fluttering wing flee from the eagle; so every creature flees its foes. But love is the cause of my pursuit. Ah me! I fear that thou wilt fall, or brambles mar thy innocent limbs, and I be cause of pain to thee. The region here is rough through which thou hastenest. Run with less speed, I pray, and hold thy flight. I, too, will follow with less speed. Nay, stop and ask who thy lover is. I am no mountain-dweller, no shepherd I, no unkempt guardian here of flocks and herds. Thou knowest not, rash one, thou knowest not whom thou fleest, and for that reason dost thou flee. Mine is the Delphian land, and Claros, Tenedos, and the realm of Patara acknowledge me as lord. Jove is my father. By me what shall be, has been, and what is are all revealed; by me the lyre responds in harmony to song. My arrow is sure of aim, but oh, one arrow, surer than my own, has wounded my heart but now so fancy free. The art of medicine is my discovery. I am called Help-Bringer throughout the world, and all the potency of herbs is given unto me. Alas, that love is curable by no herbs, and the arts which heal all others cannot heal their lord!”

He would have said more, but the maiden pursued her frightened way and left him with his words unfinished, even in her desertion seeming fair. The winds bared her limbs, the opposing breezes set her garments a-flutter as she ran, and a light air flung her locks streaming behind her. Her beauty was enhanced by flight. But the chase drew to an end, for the youthful god would not longer waste his time in coaxing words, and urged on by love, he pursued at utmost speed. Just as when a Gallic hound has seen a hare in an open plain, and seeks his prey on flying feet, but the hare, safety; he, just about to fasten on her, now, even now thinks he has her, and grazes her very heels with his outstretched muzzle; but she knows not whether she be not already caught, and barely escapes from those sharp fangs and leaves behind the jaws just closing on her: so ran the god and maid, he sped by hope and she by fear. But he ran the more swiftly, borne on the wings of love, gave her no time to rest, hung over her fleeing shoulders and breathed on the hair that streamed over her neck. Now was her strength all gone, and, pale with fear and utterly overcome by the toil of her swift flight, seeing her father’s waters near, she cried: “O father, help! if your waters hold divinity; change and destroy this beauty by which I pleased o’er well.” Scarce had she thus prayed when a down-dragging numbness seized her limbs, and her soft sides were begirt with thin bark. Her hair was changed to leaves, her arms to branches. Her feet, but now so swift, grew fast in sluggish roots, and her head was now but a tree’s top. Her gleaming beauty alone remained.
But even now in this new form Apollo loved her; and placing his hand upon the trunk, he felt the heart still fluttering beneath the bark. He embraced the branches as if human limbs, and pressed his lips upon the wood. But even the wood shrank from his kisses. And the god cried out to this: “Since thou canst not be my bride, thou shalt at least be my tree. My hair, my lyre, my quiver shall always be entwined with thee, O laurel. With thee shall Roman generals wreathe their heads, when shouts of joy shall acclaim their triumph, and long processions climb the Capitol. Thou at Augustus’ portals shalt stand a trusty guardian, and keep watch over the civic crown of oak which hangs between. And as my head is ever young and my locks unshorn, so do thou keep the beauty of thy leaves perpetual.” Paean was done. The laurel waved her new-made branches, and seemed to move her head-like top in full consent.

Thus daphne, or laurel, after Daphne, the nymph who escaped Apollo’s pursuit by the metamorphosis…

Daphne [Greek dafnh the laurel or bay-tree: in Mythology a nymph fabled to have been metamorphosed into a laurel.]

C. 1430 John Lydgate The complaint of the black knight x, I sawe the Daphene closed under rynde, Grene laurer and the holsome pyne.

1634 Habington Castara (Arb.) 19 Climbe yonder forked hill, and see if there Ith’ barke of every Daphne, not appeare Castara written.