Heliotrope, which is soulcil, which follows the sun. Because the sun rising, it opens; climbing, it climbs; declining, it declines; becomes hidden, it closes.

Among the plants named for their admirable qualities. 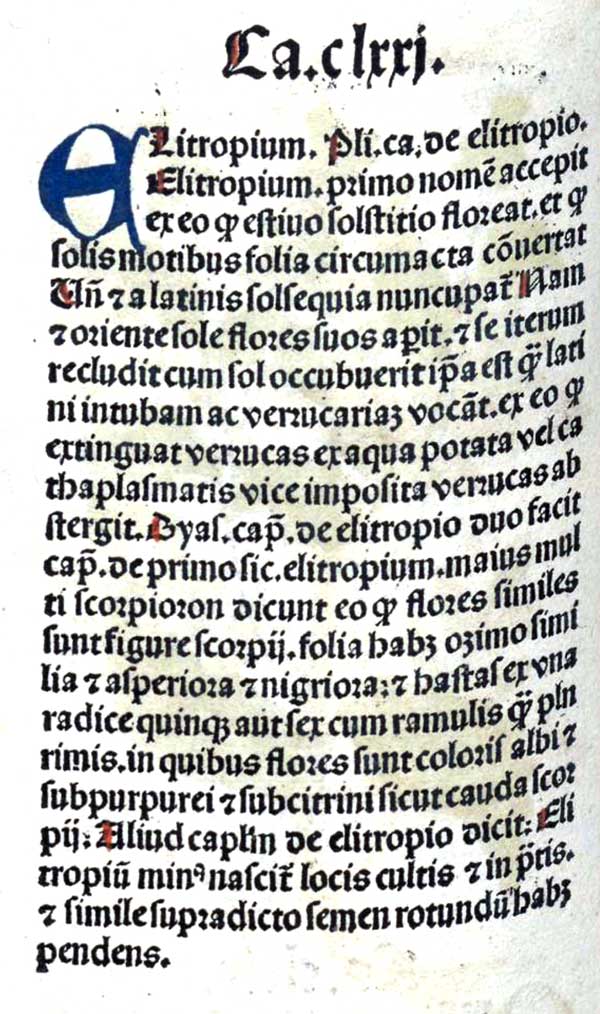 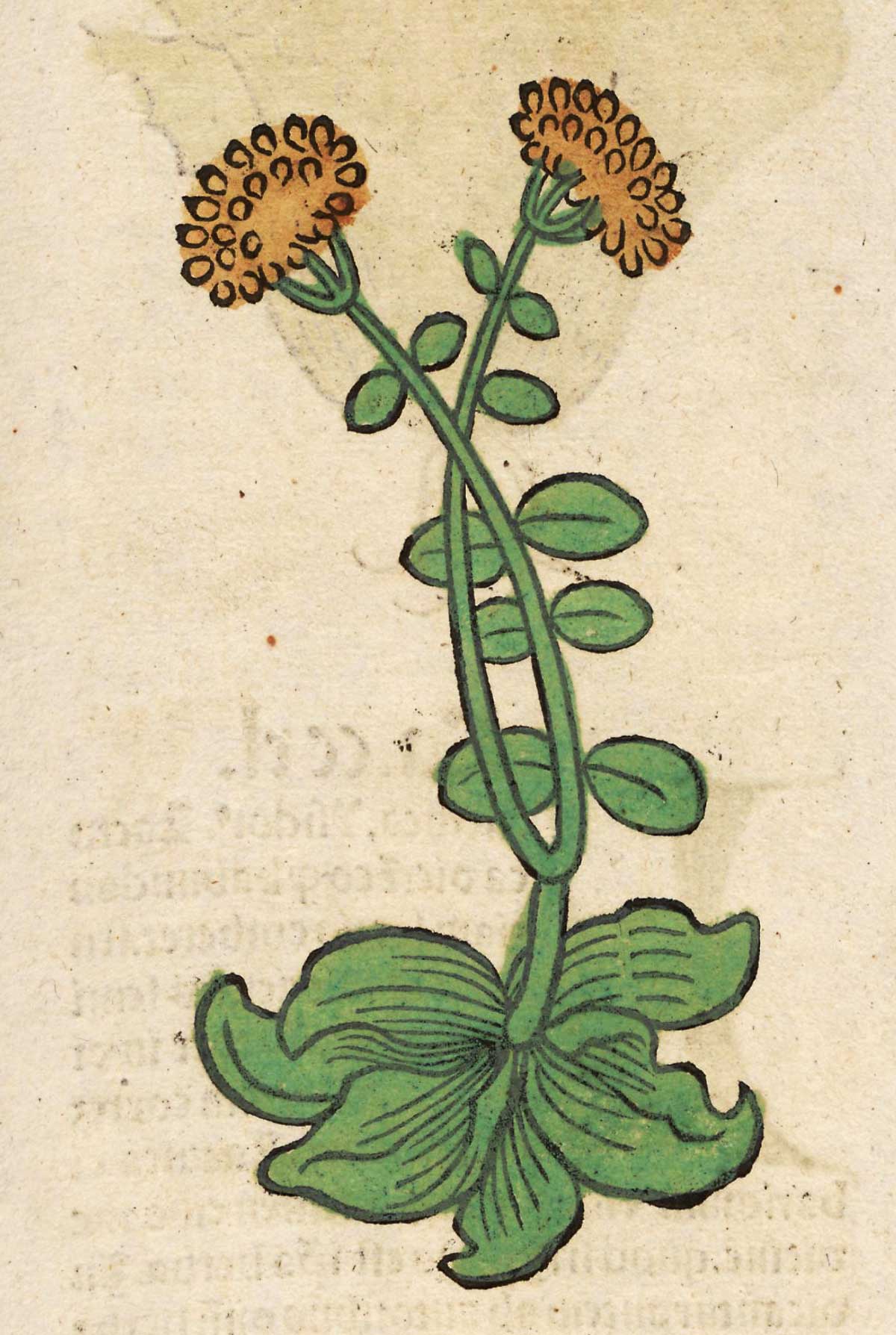 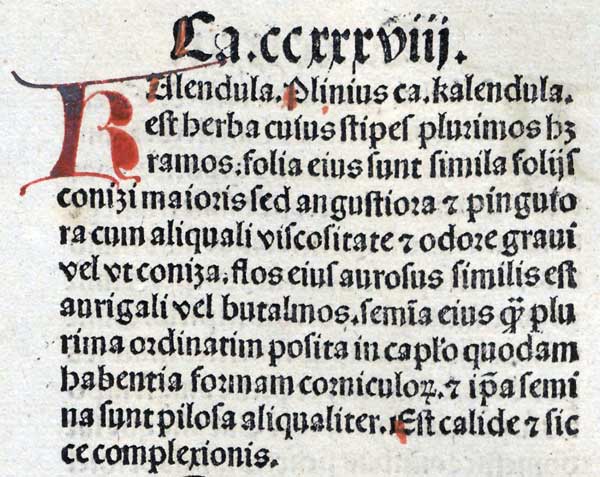 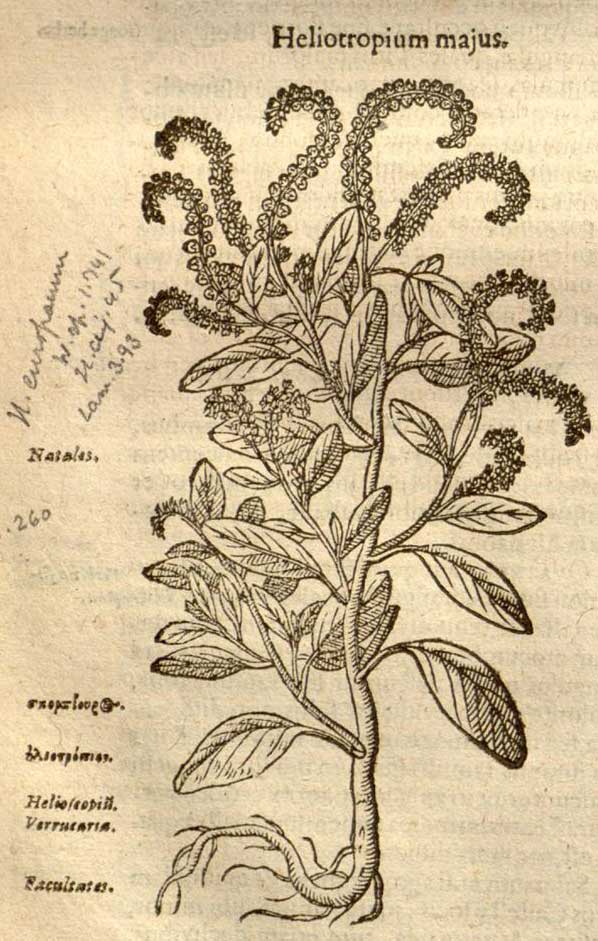 This may surprise one who does not notice in daily experience that one plant, called heliotrope, always looks towards the sun as it passes and at every hour of the day turns with it, even when it is obscured by a cloud

She [Nature] had already formed the remarkable group of the Pleiads in the sky; yet not content with these she has made other stars on the earth, as though crying aloud: ‘Why gaze at the heavens, husbandman? Why, rustic, search for the stars? Already the slumber laid on you by the nights in your fatigue is shorter. Lo and behold, I scatter special stars for you among your plants, and I display them to you in the evening and as you unyoke to leave off work, and I stimulate your attention by a marvel so that you may not be able to pass them by: do you see how their fire-like brilliance is screened by their folded wings, and how they carry daylight with them even in the night? I have given you plants that mark the hours, and in order that you may not even have to avert your eyes from the earth to look at the sun, the heliotrope and the lupine revolve keeping time with him. Why then do you still look higher and scan the heavens themselves? Lo! you have Pleiads at your very feet.’ Glow-worms do not make their appearance on fixed days or last a definite period, but certain it is that they are the offspring of this particular constellation. Consequently anybody who does his summer sowing before they appear ‘will have himself to thank for labour wasted’. In this interval also the little bee comes forth and announces that the bean is flowering, and the bean begins to flower to tempt her out. We will also give another sign of cold weather being ended: when you see the mulberry budding, after that you need not fear damage from cold.

I have spoken more than once [See II. § 109, XVIII. § 252] of the marvel of heliotropium, which turns round with the sun even on a cloudy day, so great a love it has for that luminary. At night it closes its blue flower as though it mourned [Or, “were afflicted with longing”].

To blow, or spread, as a blooming Rose, or any other flower, in the height of it flourishing; also, to display, stretch, or spread out.

“But Clytie, though love could excuse her grief, and grief her tattling, was sought no more by the great light-giver, nor did he find aught to love in her. Thereafter she pined away, her love turned to madness. Unable to endure her sister nymphs, beneath the open sky, by night and day, she sat upon the bare ground, naked, bareheaded, unkempt. For nine whole days she sat, tasting neither drink nor food, her hunger fed by naught save pure dew and tears, and moved not from the ground. Only she gazed on the face of her god as he went his way, and turned her face towards him. They say that her limbs grew fast to the soil and her deathly pallor changed in part to a bloodless plant; but in part ’twas red, and a flower, much like a violet, came where her face had been. Still, though roots hold her fast, she turns ever towards the sun and, though changed herself, preserves her love unchanged.” The story-teller ceased; the wonderful tale had held their ears. Some of the sisters say that such things could not happen; others declare that true gods can do anything. But Bacchus is not one of these.
Alcithoë is next called for when the sisters have become silent again. Running her shuttle swiftly through the threads of her loom, she said: “I will pass by the well-known love of Daphnis, the shepherd-boy of Ida, whom a nymph, in anger at her rival, changed to stone: so great is the burning smart which jealous lovers feel. Nor will I tell how once Sithon, the natural laws reversed, lived of changing sex, now woman and now man. How you also, Celmis, now adamant, were once most faithful friend of little Jove; how the Curetes sprang from copious showers; how Crocus and his beloved Smilax were changed into tiny flowers. All these stories I will pass by and will charm your minds with a tale that is pleasing because new.
“How the fountain of Salmacis is of ill-repute, how it enervates with its enfeebling waters and renders soft and weak all men who bathe therein, you shall now hear. The cause is hidden; but the enfeebling power of the fountain is well known. A little son of Hermes and of the goddess of Cythera the naiads nursed within Ida’s caves. In his fair face mother and father could be clearly seen; his name also he took from them. When fifteen years had passed, he left his native mountains and abandoned his foster-mother, Ida, delighting to wander in unknown lands and to see strange rivers, his eagerness making light of toil. He came even to the Lycian cities and to the Carians, who dwell hard by the land of Lycia. Here he saw a pool of water crystal clear to the very bottom. No marshy reeds grew there, no unfruitful swamp-grass, nor spiky rushes; it is clear water. But the edges of the pool are bordered with fresh grass, and herbage ever green. A nymph dwells in the pool, one that loves not hunting, nor is wont to bend the bow or strive with speed of foot. She only of the naiads follows not in swift Diana’s train. Often, ’tis said, her sisters would chide her: ‘Salmacis, take now either hunting-spear or painted quiver, and vary your ease with the hardships of the hunt.’ But she takes no hunting-spear, no painted quiver, nor does she vary her ease with the hardships of the hunt; but at times she bathes her shapely limbs in her own pool; often combs her hair with a boxwood comb, often looks in the mirror-like waters to see what best becomes her. Now, wrapped in a transparent robe, she lies down to rest on the soft grass or the soft herbage. Often she gathers flowers; and on this occasion, too, she chanced to be gathering flowers when she saw the boy and longed to possess what she saw.

A name given to plants of which the flowers turn so as to follow the sun; in early times applied to the sunflower, marigold, etc.; now, a plant of the genus Heliotropium (N.O. Ehretiaceæ or Boraginaceæ), comprising herbs or shrubs with small clustered purple flowers.

1676 Marvell Mr. Smirke I bis, As the Heliotrope Flower that keeps its ground, but wrests its Neck in turning after the warm Sun.

Mineralogy. A green variety of quartz, with spots or veins of red jasper; also called bloodstone; anciently credited with various `virtues’, as that of stanching blood, rendering the wearer invisible, etc. (As to the origin of the name see quot. 1601.)

1601 Philemon Holland, translator Pliny’s History of the world, commonly called the Natural historie II. 627 The pretious stone Heliotropium… is a deepe green in maner of a leeke… garnished with veins of bloud: the reason of the name Heliotropium is this, For that if it be throwne into a pale of water, it changeth the raies of the Sun by way of reuerberation into a bloudie colour… Magitians… say, that if a man carrie it about him… he shall goe inuisible.

1814 Cary Dante’s Inferno xxiv. 91 Nor hope had they of crevice where to hide, Or heliotrope to charm them out of view.