Among the plants named for their virtues and operations. 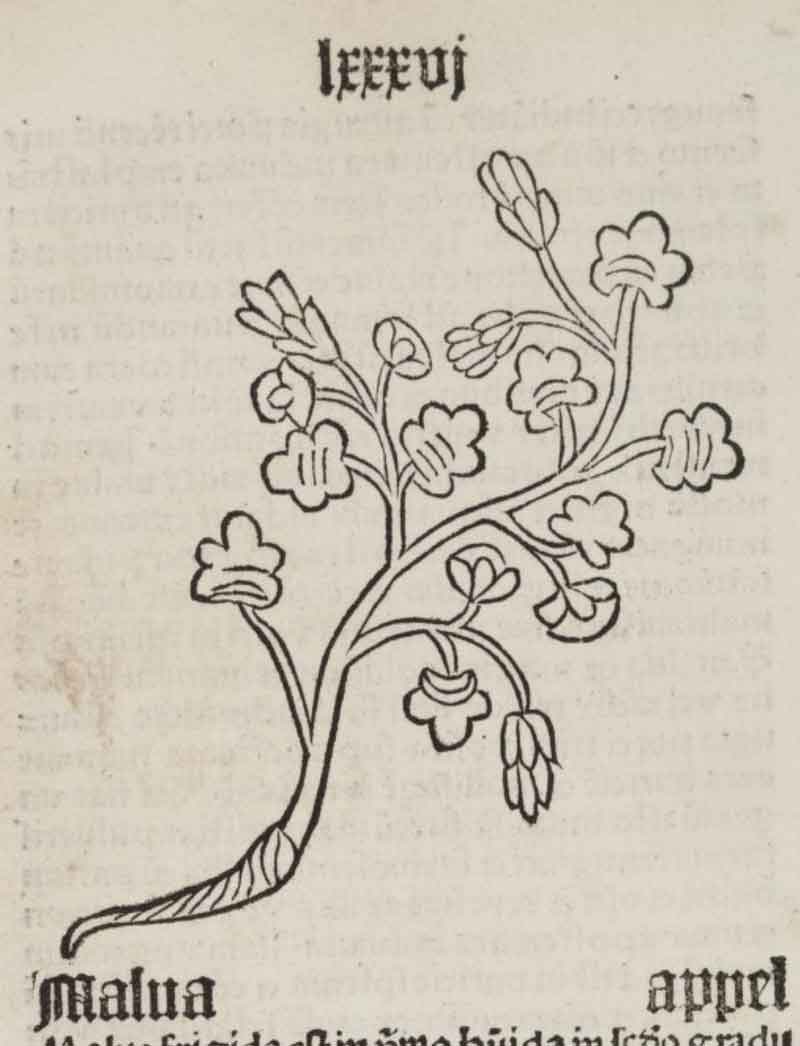 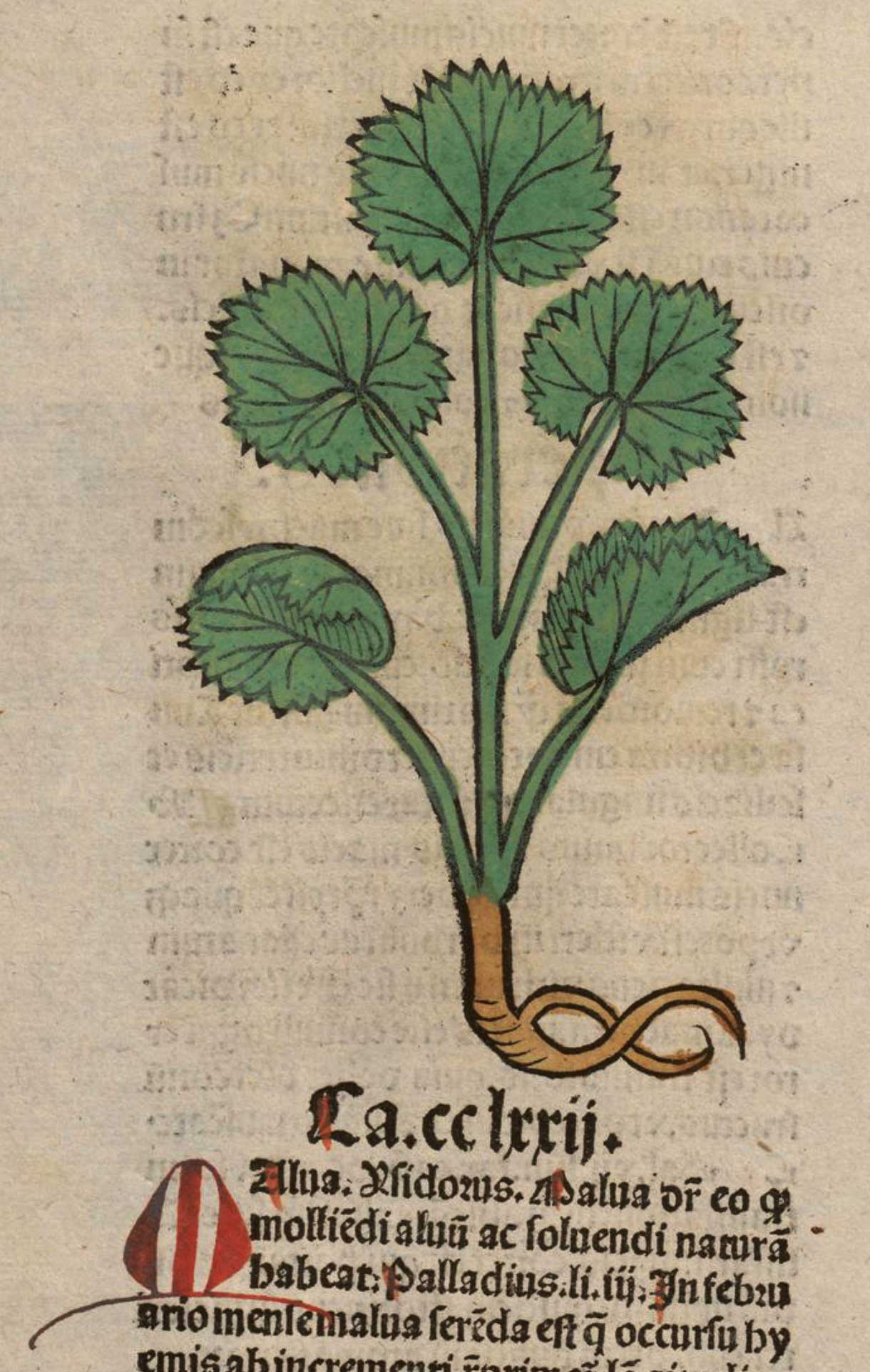 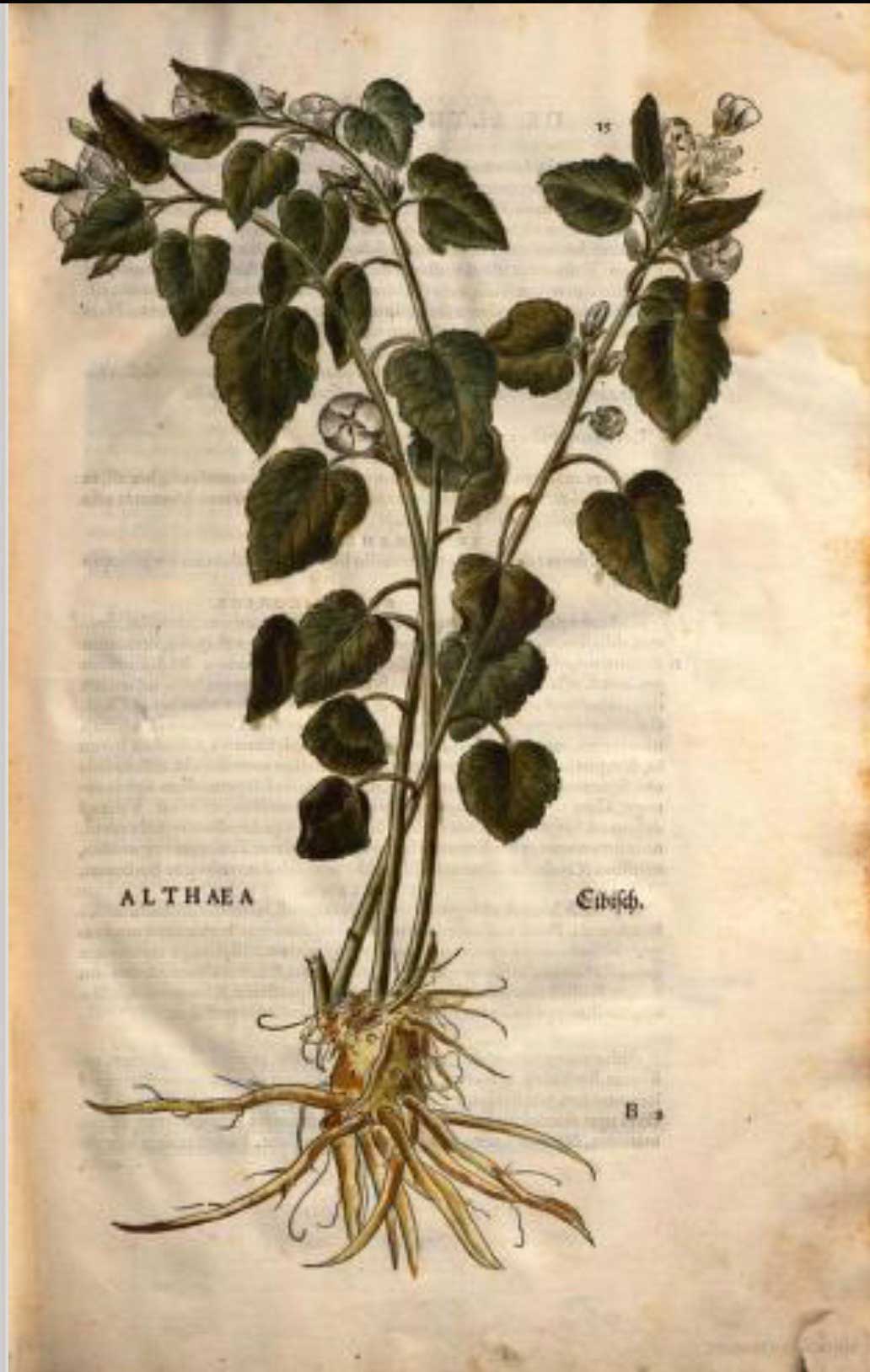 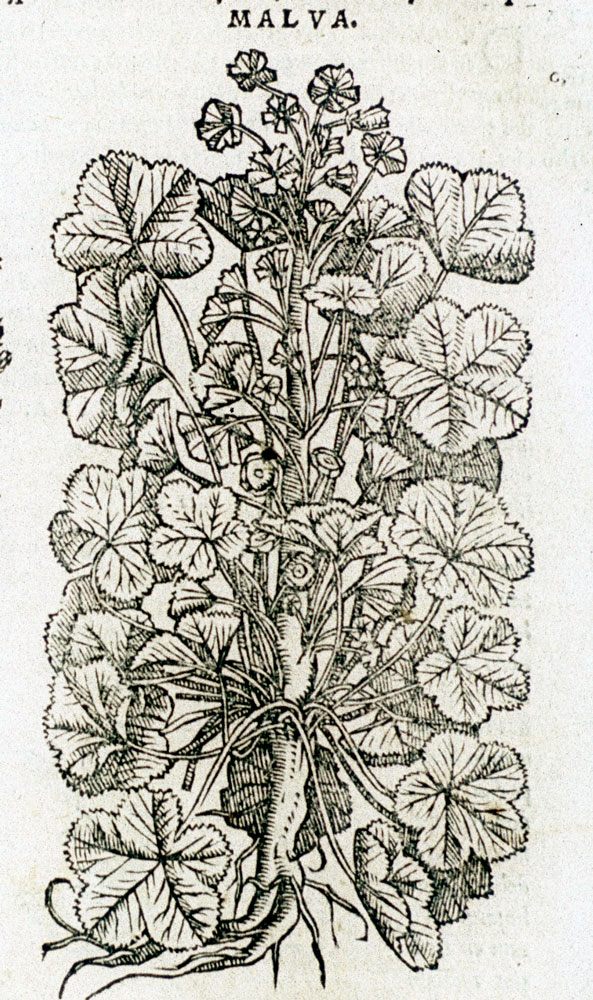 Definitions of the various classes into which plants may be divided.
III. Now since our study becomes more illuminating if we distinguish different kinds, it is well to follow this plan where it is possible. The first and most important classes, those which comprise all or nearly all plants, are tree, shrub, under-shrub, herb.
A tree is a thing which springs from the root with a single stem, having knots and several branches, and it cannot easily be uprooted; for instance, olive fig vine. A shrub is a thing which rises from the root with many branches; for instance, bramble Christ’s thorn. An under-shrub is a thing which rises from the root with many stems as well as many branches; for instance, savory rue, A herb is a thing which comes up from the root with its leaves and has no main stem, and the seed is borne on the stem; for instance, corn and pot-herbs.
These definitions however must be taken and accepted as applying generally and on the whole. For in the case of some plants it might seem that our definitions overlap; and some under cultivation appear to become different and depart from their essential nature, for instance, mallow3 when it grows tall and becomes tree-like. For this comes to pass in no long time, not more than six or seven months, so that in length and thickness the plant becomes as great as a spear, and men accordingly use it as a walking-stick, and after a longer period the result of cultivation is proportionately greater.

On the other hand, both kinds of mallow, the cultivated and the wild, are highly praised. The two kinds of them are distinguished by the size of the leaf. Among cultivated mallows the larger is called by the Greeks malope; the other is called malache, the reason being, it is thought, because it relaxes the bowels. But of the wild kinds, the one with a large leaf and white roots, called althaea, has received from some the name of plistolochia, from the excellence of its properties. Mallows make richer every soil in which they are sown. They are efficacious against every sort of stings, especially those of scorpions, wasps and similar creatures, and those of the shrew-mouse. Moreover, those who have been rubbed beforehand with oil and any one of the mallows pounded, or who carry it on their persons, are never stung. A leaf placed on a scorpion paralyses it. Mallows also counteract the poison of white lead. Raw mallow applied with saltpetre extracts splinters and thorns; taken moreover boiled with its root it counteracts the poison of the sea-hare, some adding that it must be brought back by vomiting. Other marvels are reported of the mallows, the most wonderful being that whoever swallows daily half a cyathus of the juice of any one of them will be immune to all diseases. Running sores on the head are cured by mallows that have rotted in urine, lichen and sores in the mouth by them and honey, dandruff and loose teeth by a decoction of the root. With the root of the single-stem plant they stab around an aching tooth until the pain ceases; the same plant [Possibly “root,” eadem referring to radice] clears scrofula and parotid abscesses, and with the addition of human saliva superficial abscess also, and that without leaving a wound. The seed taken in dark wine clears away phlegm and nausea. The root attached as an amulet in dark wool stays troubles of the breasts; boiled in milk and taken like broth it relieves a cough in five days. Sextius Niger says that mallows are injurious to the stomach; the Theban lady Olympias that with goose-grease they cause abortion, and others that a handful of their leaves taken in oil and wine assist the menstruation of women. It is agreed at any rate that women in labour are more quickly delivered if mallow leaves are spread under them, but they must be withdrawn immediately after delivery for fear of prolapsus of the womb. They give the juice to be drunk by women in labour; they must be fasting, and the dose is a hemina boiled down in wine. Moreover, they attach the seed to the arm of sufferers from spermatorrhoea, and mallows are so aphrodisiac that Xenocrates maintains that the seeds of the single-stem mallow, sprinkled for the treatment of women, stimulate their sexual desire to an infinite degree, and that three roots attached near to the part have a like effect. He says too that injections of mallow are very good for tenesmus and dysentery, and also for rectal troubles, or fomentations may be used. The juice is also given warm in doses of three cyathi to sufferers from melancholia, and in doses of four to those who are raving; for epilepsy the dose is a hemina of the decocted juice. This juice is also applied warm to patients with stone, and to sufferers from flatulence, griping and opisthotonus. For both erysipelas and burns the leaves are applied boiled down to an oily paste, and they are applied raw with bread for painfulf wounds. The juice of a decoction is good for sinews, bladder and gnawings of the intestines. The paste soothes the womb whether taken by the mouth or injected; the decoction makes the passage pleasant. For all purposes mentioned above the root of althaea is more efficacious, especially for spasms and ruptures. Boiled in water it checks looseness of the bowels; taken in white wine it is good for scrofula, parotid abscesses and inflammation of the breasts, and an application of the leaves, boiled down in wine, removes superficial abscess. The same leaves dried and boiled down in milk cure very quickly the most racking cough. Hippocrates gave the juice of the boiled-down root to be drunk by wounded men who were thirsty through loss of blood, and applied the plant itself with honey and resin to wounds; likewise to bruises, sprains, and swellings; as above also to muscles, sinews and joints. He gave it to be taken in wine by patients suffering from cramp or dysentery. It is remarkable that water to which this root has been added thickens in the open air and congeals. The fresher it is also, the better.

nor how great a benefit there is in mallow (malachē)
and asphodel.

Malachē is the Attic form. But, says [Athenaeus], I found the word written with an omicron in many copies of Antiphanes’ Minos (fr. 156):

I am milder than a mallow (molocha).

A common wild plant, Malva sylvestris (N.O. Malvaceæ), having hairy stems and leaves and deeply-cleft reddish-purple flowers; it is very mucilaginous. Also called common, field, wild mallow. In extended use, any plant of the genus Malva.

1605 Ben Jonson Volpone i. i, A thresher… dares not taste the smallest graine, But feedes on mallowes.

1611 Randle Cotgrave, A dictionarie of the French and English tongues s.v. Maulve, The white Mallow… . The field Mallow, wild Mallow; our ordinarie Mallow.