and of the long excuse of Penelope towards her amorous suitors, during the absence of her husband Ulysses. 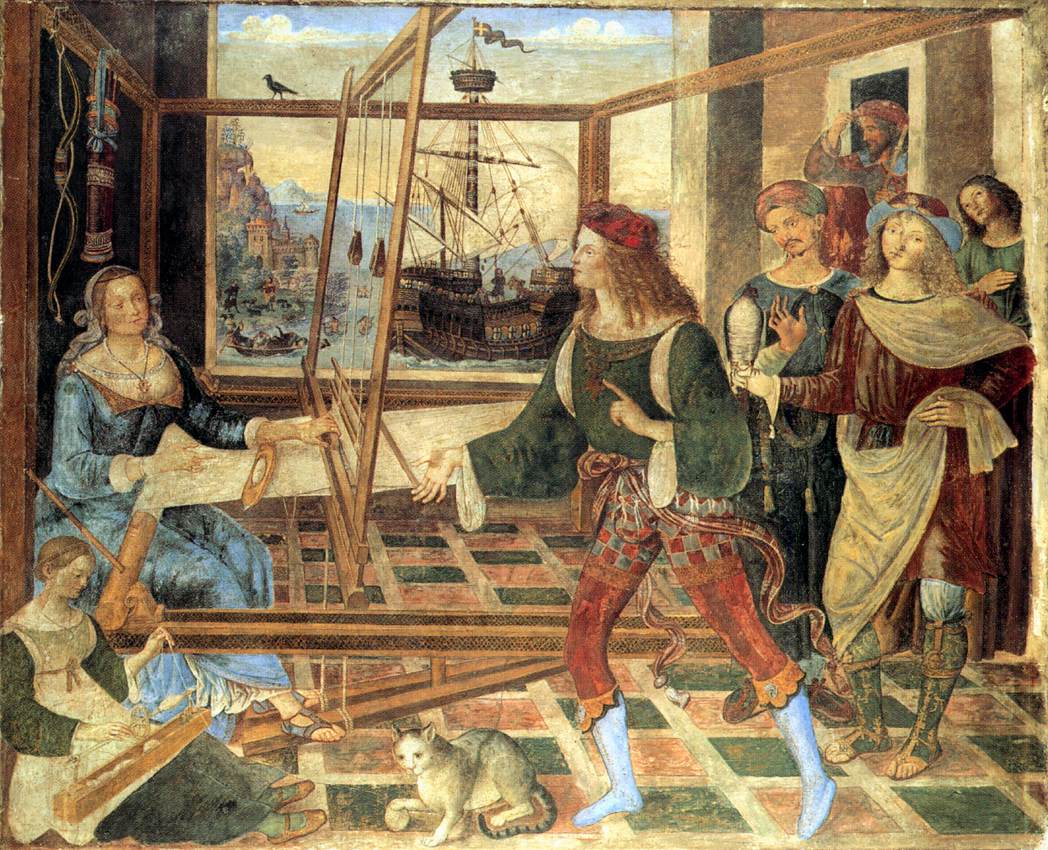 Therefore I pay no heed to strangers or to suppliants or at all to heralds, whose trade is a public one; instead, in longing for Odysseus I waste my heart away. So these men urge on my marriage, and I wind a skein of wiles. First some god breathed the thought in my heart to set up a great web in my halls and fall to weaving a robe—fine of thread was the web and very wide; and I at once spoke among them:
“‘Young men, my suitors, since noble Odysseus is dead, be patient, though eager for my marriage, until I finish this robe—I would not have my spinning come to nothing—a shroud for the hero Laertes against the time when the cruel fate of pitiless death shall strike him down; for fear anyone of the Achaean women in the land should cast blame upon me, if he were to lie without a shroud, who had won great possessions.’
“So I spoke, and their proud hearts consented. Then day by day I would weave at the great web, but by night would unravel it, when I had had torches placed beside me.

Now the Dionysus who was called the son of Semele, daughter of Cadmus, was about sixteen hundred years before my time, and Heracles son of Alcmene about nine hundred years; and Pan the son of Penelope (for according to the Greeks Penelope and Hermes were the parents of Pan) was about eight hundred years before me, and thus of a later date than the Trojan war.
146. With regard to these two, Pan and Dionysus, a man may follow whatsoever story he deems most credible; but I here declare my own opinion concerning them:—Had Dionysus son of Semele and Pan son of Penelope been made manifest in Hellas and lived there to old age, like Heracles the son of Amphitryon, it might have been said that they too (like Heracles) were but men, named after the older Pan and Dionysus, the gods of antiquity; but as it is, the Greek story has it that no sooner was Dionysus born than Zeus sewed him up in his thigh and carried him away to Nysa in Ethiopia beyond Egypt; and as for Pan, the Greeks know not what became of him after his birth. It is therefore plain to me that the Greeks learnt the names of these two gods later than the names of all the others, and trace the birth of both to the time when they gained the knowledge.

As for death among such beings [gods and demigods], I have heard the words of a man who was not a fool nor an impostor. The father of Aemilianus the orator, to whom some of you have listened, was Epitherses, who lived in our town and was my teacher in grammar. He said that once upon a time in making a voyage to Italy he embarked on a ship carrying freight and many passengers. It was already evening when, near the Echinades Islands, the wind dropped, and the ship drifted near Paxi. Almost everybody was awake, and a good many had not finished their after-dinner wine. Suddenly from the island of Paxi was heard the voice of someone loudly calling Thamus, so that all were amazed. Thamus was an Egyptian pilot, not known by name even to many on board. Twice he was called and made no reply, but the third time he answered; and the caller, raising his voice, said, ‘When you come opposite to Palodes,a announce that Great Pan is dead.’ On hearing this, all, said Epitherses, were astounded and reasoned among themselves whether it were better to carry out the order or to refuse to meddle and let the matter go. Under the circumstances Thamus made up his mind that if there should be a breeze, he would sail past and keep quiet, but with no wind and a smooth sea about the place he would announce what he had heard. So, when he came opposite Palodes, and there was neither wind nor wave, Thamus from the stern, looking toward the land, said the words as he had heard them: ‘Great Pan is dead.’ Even before he had finished there was a great cry of lamentation, not of one person, but of many, mingled with exclamations of amazement. As many persons were on the vessel, the story was soon spread abroad in Rome, and Thamus was sent for by Tiberius Caesar. Tiberius became so convinced of the truth of the story that he caused an inquiry and investigation to be made about Pan; and the scholars, who were numerous at his court, conjectured that he was the son born of Hermes and Penelopê.

In other words, they prefer to spin or weave.